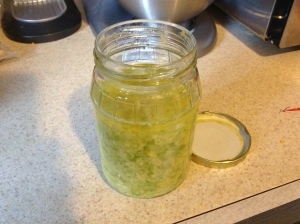 This is a very versatile sauce. The origins are Chinese, but this sauce can be adapted to any cuisine! It is mainly used as a condiment along with Chinese style Roast Duck or Roast Pork. This sauce also tastes fantastic on hot or cold Chicken, lightly steamed cauliflower (then chilled), cold or hot potatoes, plain rice, fried rice or noodles – your imagination is the limit! Since this sauce is salty, a little goes a long way.

Using a food processor chop the ginger and scallions till coarsely done.

Place in a metal bowl, add salt and mix well. Meanwhile heat the oil and let it come to almost smoking point. Pour the oil over the scallion ginger mixture, taking care that it does not splatter over you. Adjust the salt and let it cool Bottle. Place in the ‘fridge and use judiciously!!

In India we pickle a lot of vegetables and sometimes chicken, goat meat and sea food. Pickling in India is more complex than just braining in or using vinegar as a pickling liquid. We use a lot of different spices like mustard seeds, chillies (both red and green), cumin, ginger, garlic and of course vinegar, oil, lime juice and salt.

Mix together the following – ground spices, turmeric, ground ginger in a bowl.

Heat oil till it is smoking hot. Take it off the fire and add the ground spice mix and stir fry for a minute.

Put back on the fire and stir fry for about 2 to 3 minutes till the raw spices smell dissipates.

Cook the pickle on a low flame till the tomatoes disintegrate. The consistency should be thick with the oil on top.

Do not store in the refrigerator. Use a dry spoon to take the pickle out.

I got this recipe from Joyce Johar in the late 70s and have made it umpteen times. Tastes fantastic on toast, with Roti or rice. Great as a condiment to a Roast! 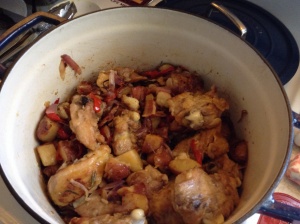 In a Dutch oven, heat the olive oil. Brown chicken pieces in batches along with some of the bacon. Keep aside in another dish till all the bacon and chicken are browned.

You can deglaze the dutch oven, after transferring the contents onto a serving dish. Serve the sauce with the chicken. It came out absolutely great!

Directions:
Cut eggplant into ½” cubes, apply salt and keep aside for ½ an hour. Then squeeze out thoroughly and place on a paper towel to remove any moisture. Grind to paste – cumin, mustard seeds and garlic in the vinegar. Mix in the rest of ingredients -turmeric and chili powder.
Heat the oil in a wok. Fry the eggplant pieces till tender. Strain out the eggplant pieces, leaving the oil in the wok. 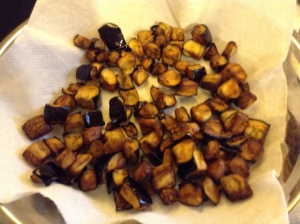 Add the ground masala and fry, stirring all the time, till brown and the raw smell has dissipated. Add raw brown sugar and salt. Then add the eggplant pieces, stirring and simmer till nearly done. Add the strained raisins and dates. and let it cook in the mixture for a couple of minutes.

Thanks to my brother Rohit for this recipe

Eggplants are called brinjals in India. In India you get baby brinjals which are stuffed with various kinds of spices. Each part of India has it’s own style of making stuffed baby brinjals.

Wash the baby brinjals, and  cut them in a cross fashion without cutting through to the stem.

Stuff the brinjals with the onion cilantro mixture.

Heat oil in a wok or kadai. Place the stuffed brinjals stem side up. Place the remaining onion cilantro mixture on top of the brinjals.

Cover the wok/kadai and let it cook on a low flame till done. Be gentle, while stirring as the brinjals must stay in an upright position.

Pour the thick coconut milk to the wok/kadai and let it come to a boil.

Serve hot with rice or roti 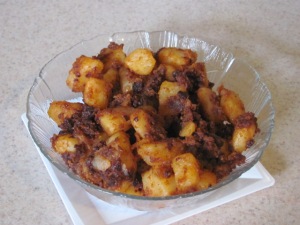 1 cup finely chopped onions
1 tsp tamarind paste dissolved  in 1/4 cup of warm water
1  – 11/2  tbsp sambhar powder
1/2 chili powder – optional
1/2 tsp mustard seed
1/4 tsp asafoetida (hing)
6 -8 curry leaves
4 tbsp oil
Salt to taste
Coriander leaves(cilantro) – a small bunch – chopped – for Garnish
Directions
Heat oil in a wok or kadai.
Add the mustard seed, and let them splutter and pop. Next add the asafoetida  and the curry leaves.Saute for 10 seconds.
Add the chopped onions and saute till they are translucent.
Next add the  potatoes and  salt to taste.
Let the potatoes cook on a medium flame till they are a pale golden brown.
Add the sambhar powder and  chili powder( if using) and stir it thoroughly into the potatoes.
Next add the tamarind water and sir it thoroughly into the potatoes.
Raise the flame  and keep stirring the potatoes till all the liquid has evaporated and the potatoes are coated with the sambhar powder and slightly brown.
Garnish with the coriander leaves (cilantro)  and serve hot as a side  with the main dish
Enjoy
Posted in Sambhar | Tagged Potatoes, sambhar | 3 Comments 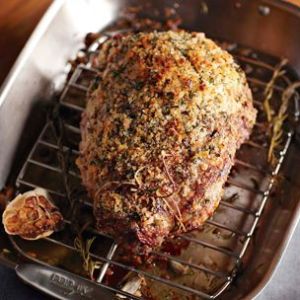 A semiboneless leg of lamb has had the hipbone removed to facilitate carving. This recipe makes enough bread crumbs to use for the Lemon Asparagus Casserole.

This item can be served with a simple curry & rice or with “Mori Daar” ( Plain split pigeon peas, also known as Toor or Arhar dal in India) and rice, or with other vegetable preparations. It is quite simply an accompaniment to a main meal.

Roast all the ground spices on low heat  in a frying pan and gently stir for one or two minutes, till fragrant.

Once cool, rub along with the salt into the meat of your choice. Allow to rest for at least two to three hours.

Heat one tablespoon of the ghee or one and a half of oil in a frying pan and gently brown the coconut until it has a pale golden colour. Do not use a high flame as this will destroy the coconut and make it smell oily and bitter.

Remove and drain on a paper towel and keep in a cool place .

transfer any oil from the frying pan and add the remaining oil or ghee into a casserole roughly 9” in diameter.

Saute the curry leaves for a minute and add the garlic/ginger paste  & onions.

Saute until the onions are well browned.

Remove with a slotted spoon so that the oil remains in the pan. Keep the fried product separate.

Add the meat to the pan and saute on a high flame initially for the first five to six minutes, scraping well regularly and tossing so that all the meat gets direct heat at some stage.

When the initial liquid begins to evaporate reduce the flame and continue cooking for a further five to six minutes.  Check the seasoning.

At this stage check the meat to see if it is half cooked, if not, cook covered for about five minutes.

Remove the lid, add the onion & garlic mixture and cook uncovered until the meat is almost cooked on a slow to medium flame.From time to time , you can add a few tablespoons of warm water to scrape the bottom and sides of  the pan.

Add the coconut when the meat is almost done and cook until cooked.

This meat is supposed to be dry and is an ideal accompaniment with curries and rice.

It can also be eaten with plain rice and yoghurt

Oil Pulling With Coconut Oil For Your Dental Health.

What is Oil Pulling and How Does it Work?

Oil pulling has been used for thousands of years as a part of Ayurvedic Practices that have been around for over 500 years.

It involves putting about a tablespoon of oil in your mouth, then swishing it around your teeth for 10-20 minutes.

There are thousands of different types of bacteria in the mouth and in our bodies. Some of these bacteria are the type that are good for the mouth and body where as others are not.

Certain bacteria can cause harm, such as Streptococcus Mutans, which is the main culprit behind plaque buildup, gingivitis and cavities.

Plaque is one of the bacteria in the mouth that creates a “biofilm” on the teeth.Having some plaque on your teeth is normal, but if it gets out of hand it can cause all sorts of problems.

The way oil pulling works is simple. When you swish the oil around your mouth, the bacteria “get stuck” in it and dissolve in the liquid oil.

Basically, you remove a large amount of the bacteria and plaque in your mouth each time you do this.

The other bacteria is Streptococcus Mutans  in the mouth and a key player in plaque buildup and tooth decay.

is caused by inflammation of the gums and happens

The immune system starts attacking the bacteria in the plaque. This is because the gums get inflamed due to Gingivitis

Bad breath, otherwise known as halitosis, is in many cases (not all) caused by the smell of chemicals and gases produced by bacteria in the mouth.

Oil pulling is a simple and effective remedy to get your dental heath back to normal.

Personally I found the taste of coconut oil very pleasant to swish around in my mouth! 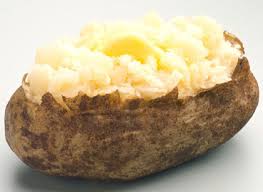 2. Carefully remove foil from baking dish. Remove garlic and set aside to cool. Brush exposed portion of each potato with 1 teaspoon oil. Return uncovered baking dish to oven and bake until potatoes are tender when pierced with tip of paring knife and skins are glossy, 15 to 20 minutes.

Credit for this recipe goes to America’s Test Kitchen